You should know that F1 Savannah and Savannah F5 will differ from each other not only in size, but also in behavior. Nevertheless, there are common traits that characterize all generations of Savannah cats. Please read this list carefully and this information will help you to make up your mind if Savannah cat would suit you and your family as a pet. 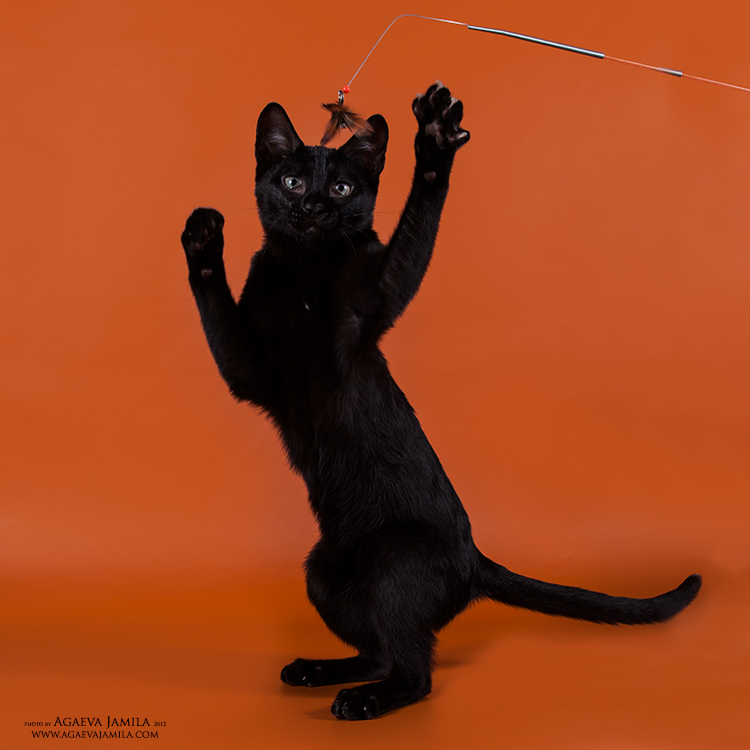 - They are smart enough to understand that they need to listen to the owner.
- They are extremely curious, so you need to be careful, because they can go anywhere and explore anything
- They will try to push things down from the tables or shelves in order to "explore the object". Our pets have explored the cups, the vases and even a bottle of whiskey.
- They are incredibly stubborn. If they intend to do something, they will definitely accomplish that. Do not ever hope they they will forget their plans.
- They will take an offense if you scold them, take their toy away, etc.
- Generations F1-F2 can jump up as high as 2 meters. But the others are not much behind. For example, an F4 female from our cattery can easily jump up 1.5 meters (!).
- They produce unusual sounds for domestic cats. For example, our beautiful F4, hisses like a rattlesnake when hunting for flies.
- They can also hiss while communicating, but not to show fear or anger.
- They use extraordinary ways to communicate by sounds and body language.
- And the most important fact about these amazing creatures is - Savannah cats are strongly attached to their owners. They do not like to change the house. So be really careful when you plan to take a kitten as a pet. Make sure that you understand that this animal will stay with your family for about 20 years.

Savannah Cats want to play, explore, and can cuddle for some time when in mood. Each cat has its individual needs in the amount of attention that it enjoys giving and accepting. Some Savannah cats are able to bring items in the game, because it fills them with energy and develops intellectually. If you want to teach your pet this trick you can try the training techniques that are widely used in training dogs for this skill. Even without any trainings, our F4 brings a toy in her teeth when she wants somebody to play with her. But the rest of the cats find this idea silly, why should they bring anything to the owner?
One breeder shared her experience with Savannah cats: "Be prepared for some of Savandalizm! I have been a cat owner for a long time and I often wonder why some owners believe that it is impossible to train cats. Cats can be trained like dogs. People are not ready to accept this because the society wants to have such pets that always obey.
If you are not ready to devote enough time to the development of your pets, they will get bored and they will start to misbehave. When Savannah is bored, it is like a miserable unsatisfied toddler who tries to entertain himself. So it is your responsibility to come up with some tasks for your pets and games for their intellectual development.
Owners of Savannahs know how intelligent these cats are, and how difficult it is to find appropriate tasks and exercises. But on the other hand, all their efforts are rewarded, because Savannahs show amazing results in their development. However, for those owners who do not bother to learn about this amazing special cats, pets have become disobedient. To avoid negative consequences - spend more time with your pets. " 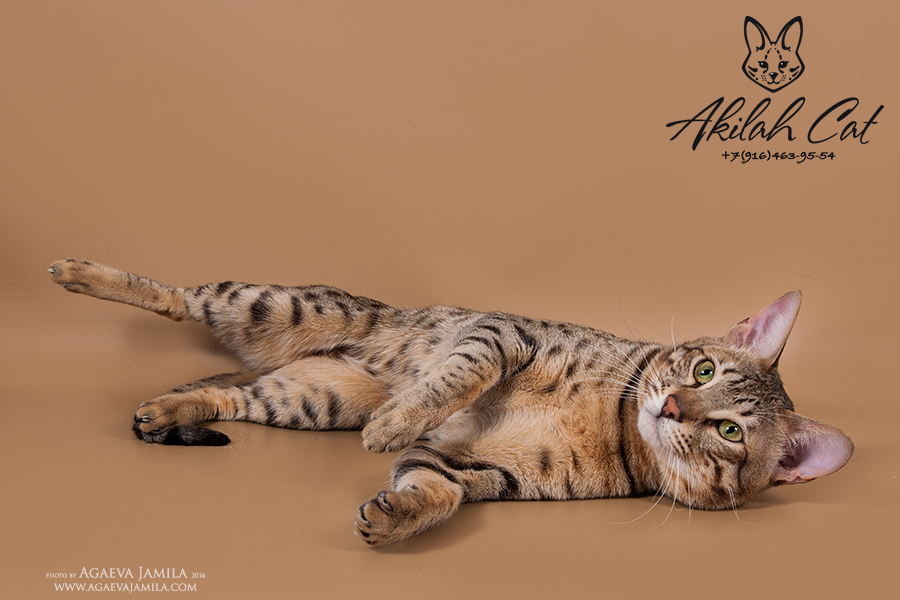 Reasons for some cat habits
Purring
We all know that cats purr when they are happy. Some scientists have found new surprising discoveries in this field. The cats purr not only when they are pleased. Cats can also purr when they feel threatened or nervous. According to the theory of scientists, in some cases, it is a sign of calming down and submission. On the other hand, this theory does not explain why cats often purr when they get injured, get sick, or give birth. In these cases, probably the vibrations in their body are more important than the sound or human reaction to this sound. This vibration calms the cat down.
You will be surprised to know that the cats have realized how to get more attention from their owner with the help of purring. The cats who want something from their owners, add some high sound to their purring. No owner can ignore such "requests" of his/her pet.
Fear of water
This is a fallacy that all cats are afraid of water. Yes, many domestic cats do not like being wet (which is not exactly the same as the fear of water!). Nevertheless, this does characterize absolutely all cats. There are breeds that have positive attitude towards the water. Water attracts them, and, they are happy to swim. Even ordinary domestic cats often like playing in the shallow water or are fascinated by pouring water. If your cat does not want to take a bath, it is most likely because of the climate in which you live. Leopards and lions live in hot climate, so they are ready to splash in the water. But domestic cats prefer to stay dry, so as not to over-cool themselves in more moderate climates. The same goes with Savannah cats. Some of them enjoy splashing very much, whereas others will stay away from water as far as possible. Our F2 Klepa bathes with great pleasure, but F4 Aquila will keep himself away from water by all possible means. 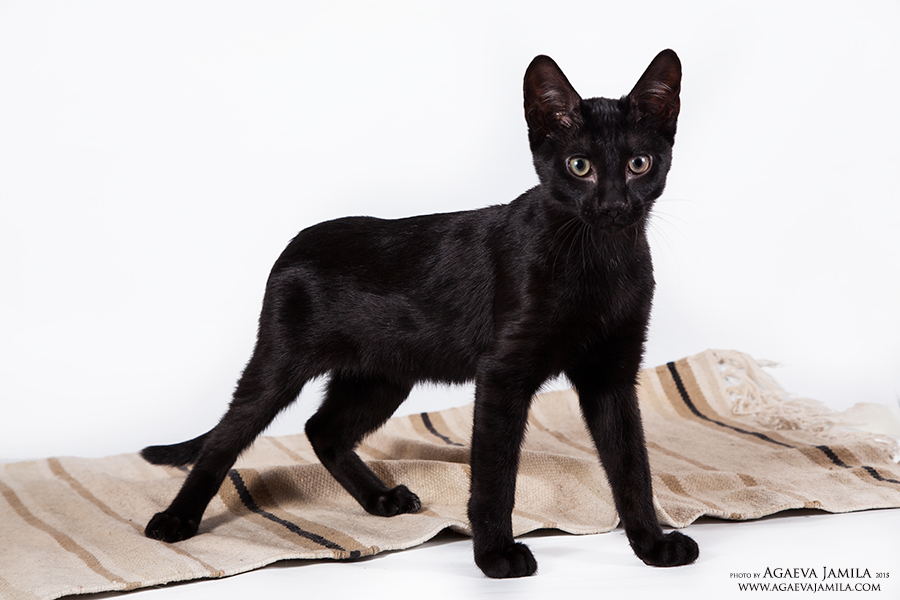 Why do cats knead?
When your cat is almost going to curl up on your lap, it suddenly begins to knead, thrusting its claws into your legs for a few minutes before lying down. It may even scratch you, which is not pleasant at all. There are two explanations for this behavior. This may be an instinct from the distant past or from childhood. Taking into account the fact that cats go to sleep after such a "procedure", some experts have suggested that the cat does it because her ancestors had to prepare a place for sleeping. Wild animals stamped and kneaded, to make the ground where they were going to sleep, softer, smoother and more convenient. Another version of the origin of these movements - from childhood. The kittens stimulate the secretion of milk from the mother cat by such movements. Now, when, once again, your cat will launch its claws into your flesh, at least you will know that it is not the act of violence.
When cats rub against people or objects
We know that many cats like attention. When we see that the cat rubs against the door jamb or the owner's leg, we think that they want to scratch their bodies. In fact, there is a more complex explanation of this habit. The cats are animals that mark their territory. They have special odorous gland in different places of their body, and when the cats rub, they sign "their" territory. If the cat rubs against your leg, probably it marks you as "its property". In its opinion, if another cat approaches you, it would feel the smell of your pet and should retreat.

When the cats lick
All the cats love keeping their coats very clean. They often lick their fur. But do not be offended if your cat is trying to "wash" you as well. It does not consider you dirty. Like other animals, cats perform such caring manipulations for closer ties. If you have several cats, which have grown together, you have repeatedly seen how they lick each other, this is how cats express their affection for each other. If your pet tries to lick you - this is a clear sign that she thinks you are its friend. There is also another opinion on this subject. Some scientists believe that your cat tries to "wash off" your scent by licking himself after being stroked. It also tries to "wash off' your scent from you, as you are "its property" :) in your cat's eyes. 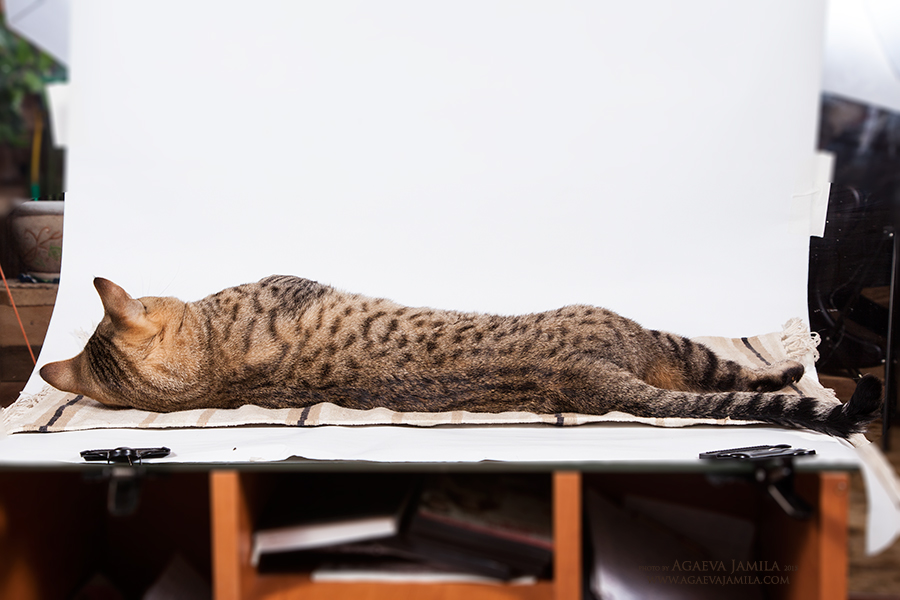 How to feed Savannahs?